“I promise to do my absolute best for you and to be completely upfront with you throughout your case.”

Ron Bamieh, founding partner of Bamieh and De Smeth, PLC, opened the law firm in December of 2002, to use his skills as a seasoned trial lawyer to help those in need of legal services.

A veteran criminal and civil law attorney, Ron brings a wealth of legal expertise to Bamieh & De Smeth. His reputation as a hardworking, dedicated, and tenacious attorney is well known in the legal community. His ability to discuss complicated legal issues emphatically and frankly has benefited thousands of clients served by the firm. 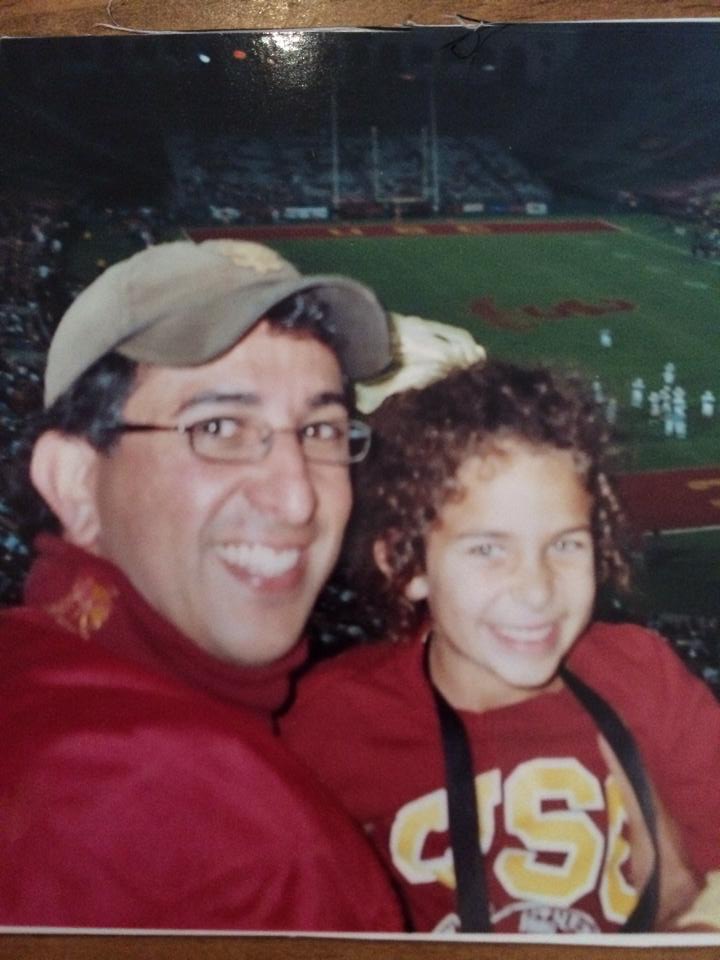 Ron grew up in the San Francisco Bay Area with his parents and sister. His fondest memories of his childhood are of playing sports and developing a love for his hometown teams. His natural competitive nature fueled him on courts, fields, and in his academics. Ron enrolled in the University of Southern California with the hopes of pursuing a career in professional sports but decided a lack of talent and opportunities meant that a business degree in finance was the better option. Ron is a Trojan for life and has undying love for his alma mater and his dislike of both ucla and notre dame (intentionally not capitalized per Ron’s request) are present to this day. Ron still attends just about every SC home football game, and his Monday morning mood is often predicated on the success of his Trojans on the field the previous Saturday.

While at USC, Ron developed an interest in a career in law and applied, attended, and obtained his law degree from the University of Loyola of Chicago’s School of Law. While Ron enjoyed law school education, what he really loved were his classes on trial advocacy and evidence. The competitive nature of litigation was a natural fit for a young man who loved competing in athletic events.

After graduating from law school, Ron was appointed to work in the George Herbert Walker Bush White House as the Assistant to the Chief of Staff. Later during his service to President Bush he was transferred from the West Wing to the United States Department of Justice as Assistant Chief Deputy. At DOJ, Ron received training on how to be a trial lawyer through courses conducted by seasoned US Attorneys and Federal Judges. Ron was able to put those skills to use in cases he handled in the Federal Court on behalf of the United States. 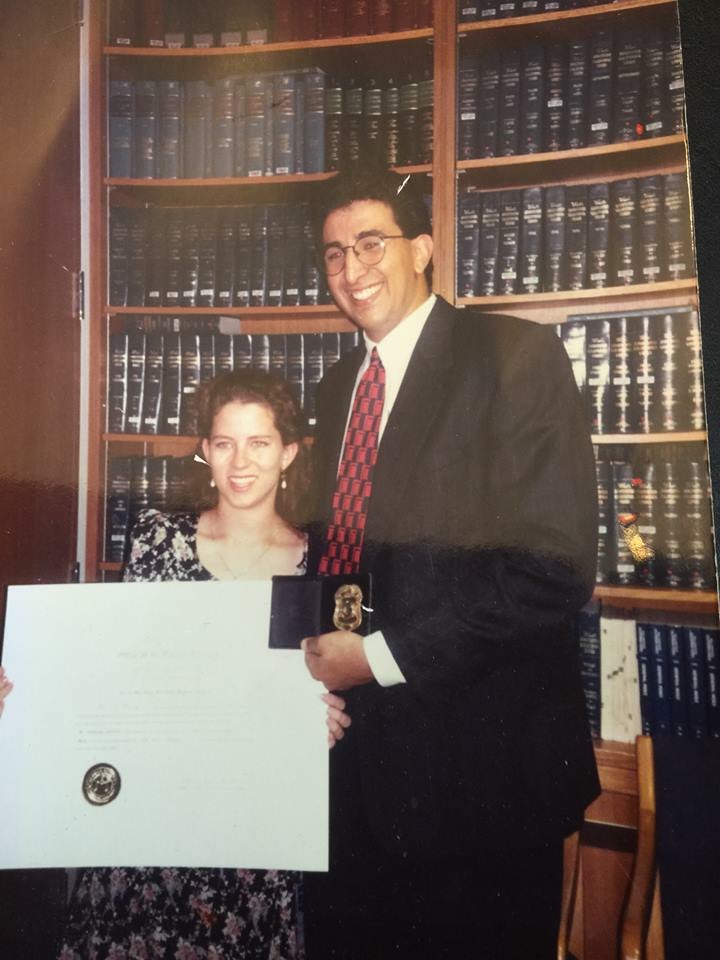 In 1993, Ron joined the Ventura County District Attorney’s Office, and he credits those years for developing his skills as a trial attorney. Ron became the youngest attorney ever promoted to Senior Deputy District Attorney in only his third year in the office. Ron received the Prosecutor of the Year award in 1996 and 2000. He handled some of Ventura County’s most complex and high-profile criminal cases as a prosecutor in the Major Crimes Unit. In 1997, Ron started an investigation and prosecution unit in the Ventura County District Attorney’s office that focused on old unsolved murder cases (called “cold cases”). Ron took on an unsolved murder case of a woman who had disappeared in 1992. Using innovative investigative techniques, Ron solved the case and convicted the perpetrator, who is now on California’s Death Row. (People v. Justin Merriman.) Ron’s work on that case was so innovative that he and his investigator were featured on NBC’s Dateline during a one-hour broadcast. While at the District Attorney’s office Ron tried over 80 cases and was known as the prosecutor who never lost a felony case, including 9 murder trials. 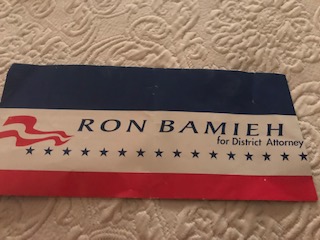 In August of 2001, Ron announced his intention to seek the office of District Attorney. Ron was the severe underdog in the race, attempting to prevail against the popular incumbent’s hand selected candidate. In one of Ventura County’s most publicized races Ron lost the election in March of 2002.

In December 2002, Ron founded Bamieh & Erickson with his good friend Philip Erickson (1959-2005). Ron and Phil built a sound practice focused on criminal defense and personal injury cases, and the firm grew exponentially in the first three years of its founding. Ron and Phil prevailed in a hotly contested wrongful death lawsuit against the City of Oxnard and were one of the initial firms to file suit in the priest sexual abuse scandal of 2002-03. Ron continued to work in criminal law while trying civil cases and had a series of successful defenses in high profile cases early in the firm’s existence. In 2003, the Pacific Coast Business Times named Ron as one of the “40 Under 40” top business owners on the Central Coast. Ron also received the “Positive Image for Action in the Community Award” from Baseballers Against Drugs in 2004.

In 2004-05 just as the law firm had started to thrive, Ron suffered a pair of tragedies that impacted him both personally and professionally. The first was the loss of his four-year-old daughter who contracted a rare form of cancer that eventually took her life on January 21, 2005. That was followed by the terrible news on September 15, 2005 of the death of his good friend and law partner Philip Erickson.

After Phil’s death, the firm and Ron suffered not only the great loss of a friend but also the loss of one of Ventura’s best lawyers. With the help of friends and family Ron decided that the dream he had with Phil of running a successful law firm would not die with his close friend. Ron reorganized the firm into the law corporation of Bamieh and Erickson, keeping Phil’s name in tribute to the dream they shared together. It was like starting over after the loss of Phil, with Ron having to slowly build the firm once again. 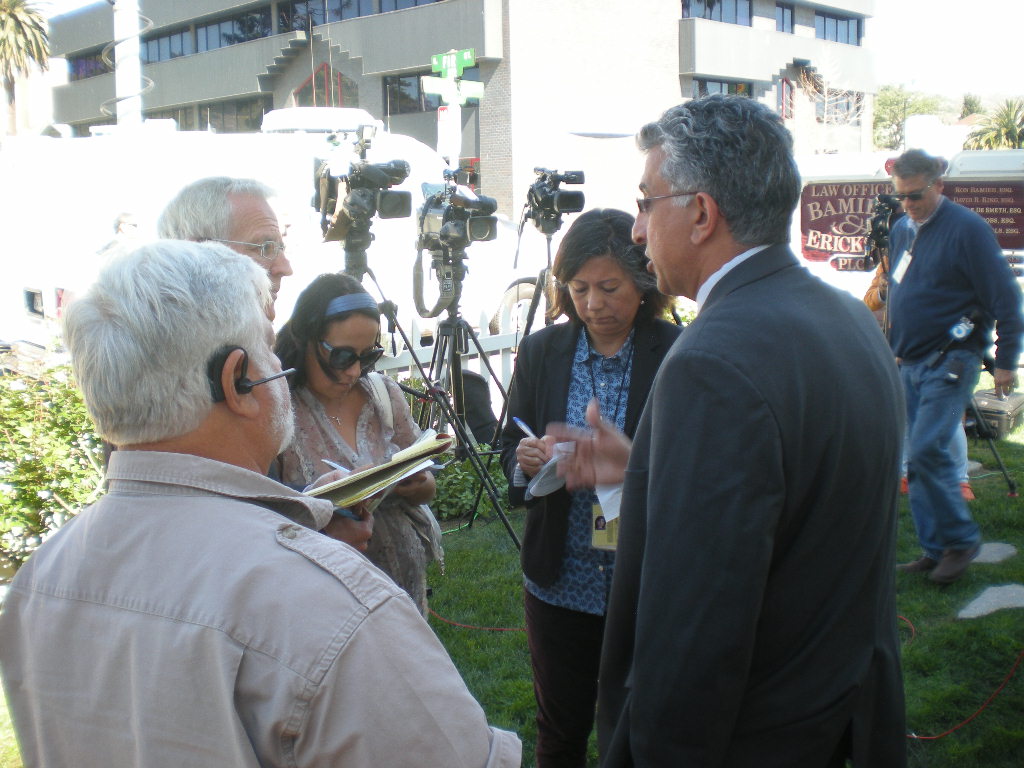 In private practice, Ron has successfully defended 9 murder cases, has tried over 60 cases as a criminal defense attorney, and 10 civil cases to verdict. In 2009, Bamieh & De Smeth, PLC was given a Circle of Excellence Award in recognition of the firm’s achievement of attaining “The Best of the Best” in small law firm business. In 2011, the Ventura County Criminal Bar Association awarded Ron the Richard Erwin Award as Ventura County Defense Attorney of the Year. The award symbolizes excellence in advocacy and dedication to clients. Ron was the first individual in Ventura County history to be named both Prosecutor of the Year (1996, 2000) and Defense Attorney of the Year (2011). Ron was the first defense lawyer in Ventura County to receive a complete acquittal on a special circumstance Murder case in 2012. 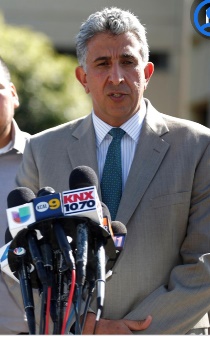 Ron became an advocate for victims of crime, taking cases where women and men who had been sexually assaulted were suing the perpetrators of those crimes. Ron has become and is one of Ventura County’s most prolific trial lawyers. In 2013 Ron was named a “Super lawyer” by California Lawyer, a distinction given to only the top 5% of lawyers in the State, and has maintained that distinction every year since he was first named a Super Lawyer. He has also been named 10 Best Attorneys (American Institute of Criminal Law) and Top 100 Trial Lawyers (The National Trial Lawyers).

In 2018, Ron offered a partnership to his longtime friend and associate Danielle De Smeth, and Bamieh and Erickson, became Bamieh and De Smeth January 1, 2019. This was a partnership 20 years in the making. Ron coached Danielle when she was a member of Ron’s Buena High School Mock Trial team in 1998 and 1999 (Danielle was named Mock Trial Defense Attorney of the Year both years she competed), and they maintained a friendship ever since.

In 2012, Ron saw the opportunity to bring the talented lawyer into the firm, and Danielle joined the firm as an associate in the civil division in 2013. In 2016, Danielle began managing the firm, and in 2019 was named Managing Partner. Danielle was instrumental in expanding the firm’s civil practice areas, opening an office in Santa Barbara in 2015, and developing the firm’s family law practice. 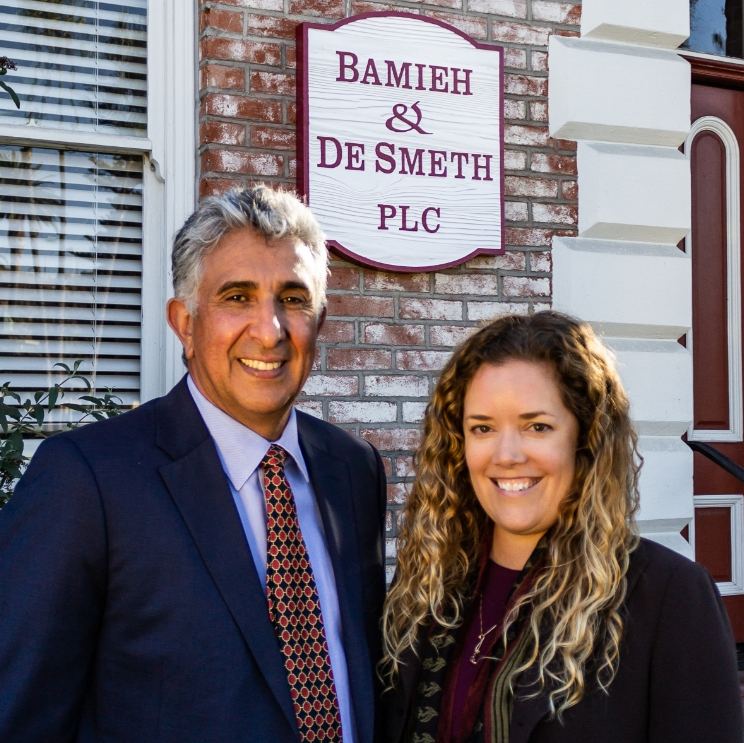 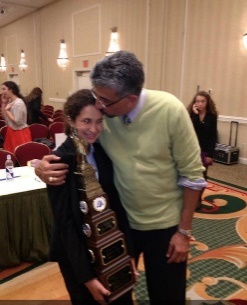 Throughout his time in private practice Ron has remained active in his community. Ron has contributed as a Law Professor at the Ventura College of Law, teaching Advanced Evidence and Criminal Procedure, and volunteered his time at Buena High School and later La Reina High School teaching both schools’ Mock Trial teams. The teams Ron coached (which featured his daughter) at La Reina High School were legendary and considered one of the greatest teams in the history of California Mock Trial. Ron’s La Reina teams won two world championships (2011 and 2012, finishing third in 2013), was the only school in state history to win three consecutive state championships (2011,2012,2013, finishing second in 2014), and finished second in the nation at the National Mock Trial competition during his tenure as mock trial coach from 2011-14.

Ron has coached baseball, basketball, flag football, and soccer in Ventura for over 15 years. He was a board member of Big Brothers/Big Sisters, served on the Board of the Rubicon Theater, and is actively involved in Downtown Rotary and the Ventura Chamber of Commerce. Ron is also a key fundraiser for the Children’s Cancer and Blood Disease Program and Children’s Resource Library at the Ventura County Hospital, which is named after Ron and Jennifer’s daughter Remy (2000-05). 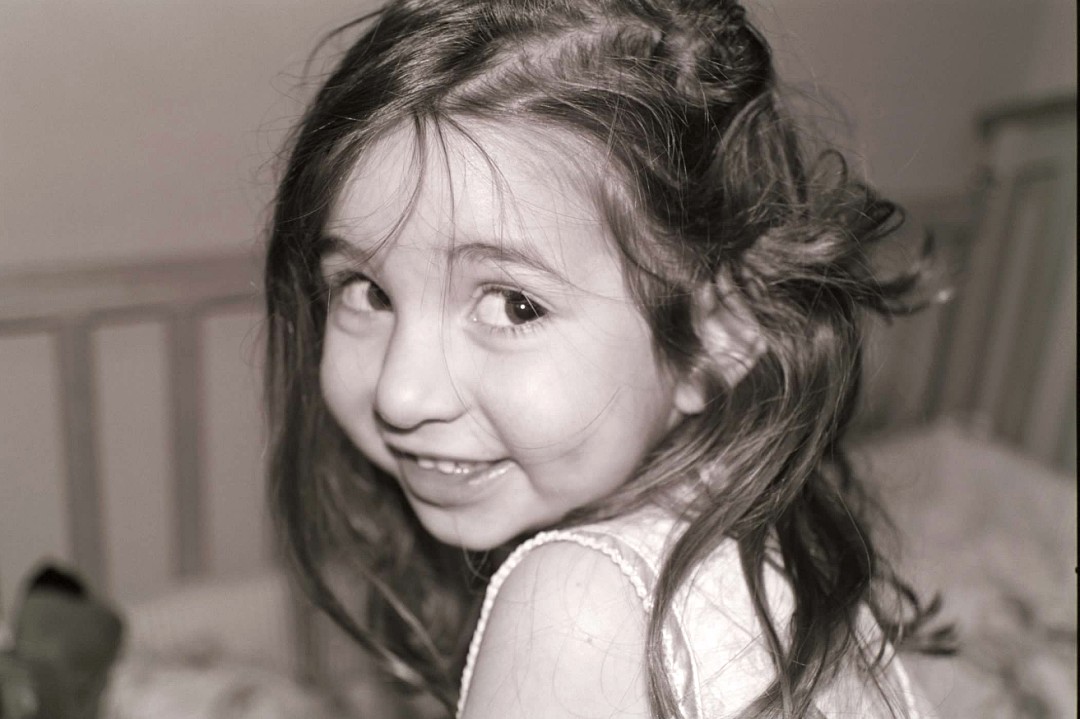 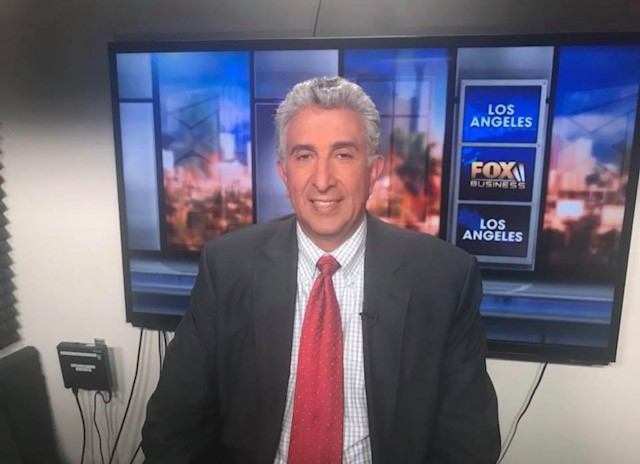 Ron frequently comments on political and legal issues in the media on various news programs on CNN, MSNBC, and Fox. He has been a frequent guest discussing topics including constitutional law, state and federal policy, and the viability of lawsuits and criminal prosecutions.

Ron spends most of his free time with his wife and family, coaching several teams in the local little league, youth basketball, and flag football. Ron claims that there will be a point where he has coached just about every kid in Ventura and the surrounding area. At it stands now, Ron has coached over 90 youth sports and mock trial teams, over 1000 kids, and has won numerous championships and tournaments while doing so.

Something you will hear Ron say a lot: “Winner, winner, chicken dinner.”

What clients say about Ron:

“I want to thank the office Bamieh and De Smeth for helping me through my case. You were very honest and upfront with me through the whole process. Specifically Ron Bamieh! Everyone was professional and accommodating and all my questions were answered in a timely fashion. That goes a long way with me. Again thank you for helping me through this unfortunate time in my life. I would definitely recommend Bamieh and De Smeth to family and friends because I know they would be in good hands.” 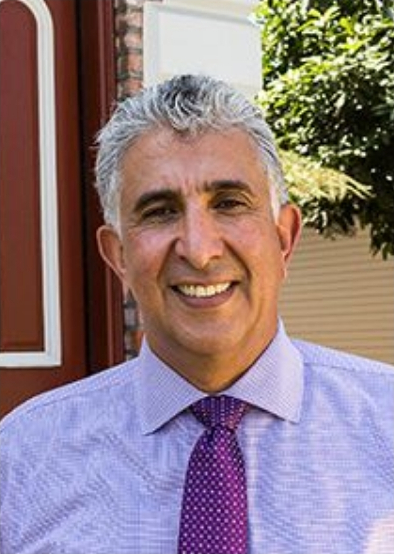 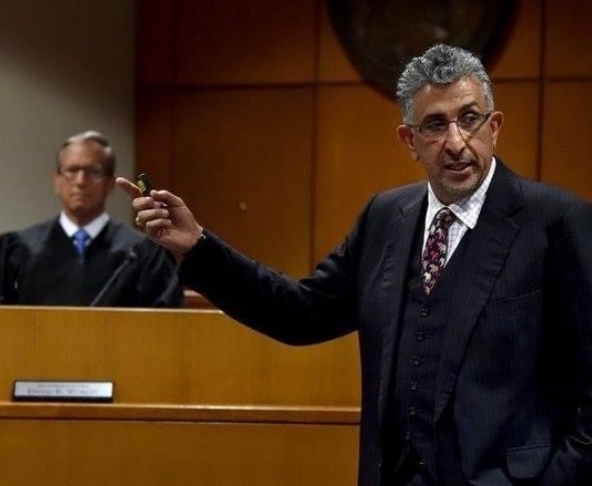 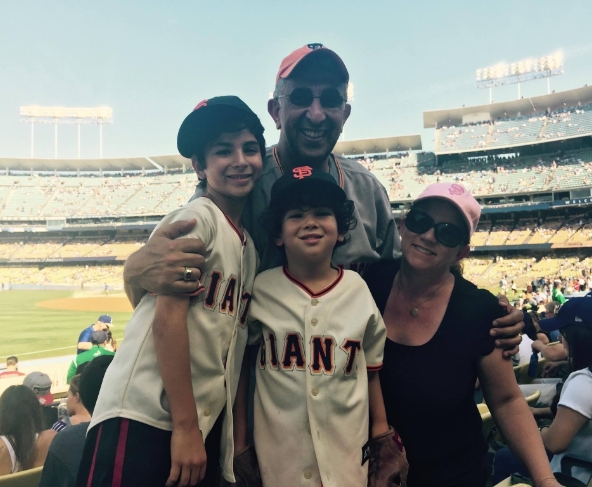 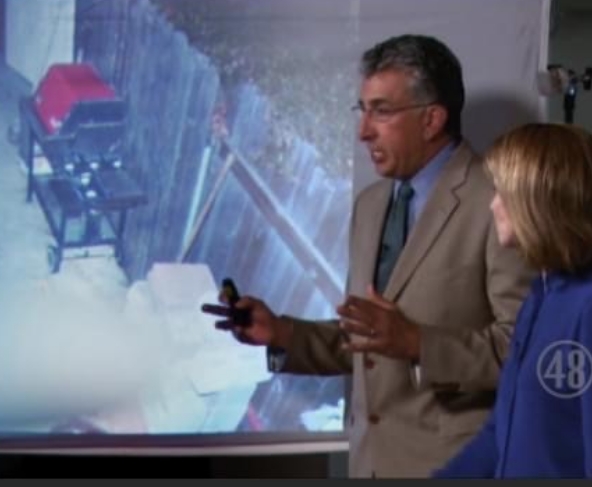